“The Rat Catchers, 1900” by Photographic Collection from Australia is licensed under CC BY-ND 2.0.

Rats, mice, and humans have had an uneasy relationship with each other for a very long time now. The largest escalation of rodent problems occurred during the Victorian era in Europe. The 19th and early 20th centuries saw rapid expansion and development of larger urbanized areas across the globe. London in particular was becoming crowded and congested with an ever-increasing mass of humanity.

London's overall congestion made things difficult for humans, but it created a very enticing environment for rodents. Rats had elaborate and relatively safe sewer systems to rest in. They could eat their fill of trash and their size usually made it easy to hide or escape from any humans or other predators. Even Queen Victoria herself had to deal with rat problems in Buckingham Palace. Palaces are surprisingly susceptible to rodents. A combination of open entry points, well stocked kitchens, and a generally low concentration of humans makes for an endearing combination for rats and mice.

On top of everything else, Europe was an influx with a boom of the Norway rat (Rattus norvegicus), a larger, fiercer, prolific rat species. All of these came together to pose a huge problem for European city dwellers. Rats and mice posed a threat to both food supply and potential risk of disease. To combat this, a new profession would arise - the rat catcher. This new industry, would be highly sought after, and in turn would give rise to modern rodent control that we know today.

The Rise of the Rat Catcher

A female rat only needs 21 to 23 days to give birth to a litter. So it's easy to see why London and other cities rat problems could go from difficult to severe in the blink of an eye. It didn't take long for London, and other large cities in Europe, to recognize that they needed to find an answer to the rodent problem. A potential solution presented itself in the form of bounties.

The government was willing to pay people to deal with rat infestations. Every rat would earn people a little extra cash. If someone could catch more than 5,000 in a year they'd earn special privileges. That number might seem excessive at first. However, we need to remember just how many rodents were found in cities at that time. One of the most successful rat catchers noted that some areas, like the royal parks, were quite literally spilling over with the rodents. The animals would gnaw into bridge drains and come on in mass on the other side.

The sheer ubiquity of the rat population made a 5,000 capture count per year a lot more viable. This is especially true when we consider that it essentially breaks down to about 13 rodents per day. However, where there's easy money there's also going to be a lot of competition.

The central question a rat catcher faced is quite simple - "How do I obtain a rat?" The most obvious answer is right there in the job description. A rat catcher usually tries to catch wild rodents, but again, we need to consider just how competitive a new market can be. England was facing some significant socioeconomic issues at the time. This meant that a new profession would build up a lot of interest in a very short period. People were suddenly determined to catch as many rodents as possible, and there are only so many rodents that can be found in the usual places.

The more innovative rat catchers would start to go into the sewers to find their prey. The sewers often acted as resting places for rats who wanted to escape from humanity for a while. But that was only the start of people trying to work smarter rather than harder. For example, some of the rat catchers began to bring dogs with them into the sewers. Others began to experiment with other animal helpers. We even have reports of rat catchers who tried to use trained monkeys for their endeavours.

However, some rat catchers really thought outside the box. They realized that the bounty was centred around the exchange of a rat for money. There's nothing specifically saying that the rat needed to be caught in the wild. What's more, there's not even any good way to prove where a rat came from.

Rat catchers were more familiar with how fast the rodents bred than anyone. So it's not too much of a surprise to find some people intentionally breeding rat colonies to supplement their captured rodents. This led to a surprising evolution of the profession. Many rat catchers developed a real talent for rat breeding. 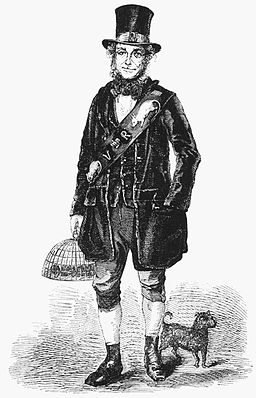 A gentleman by the name of Jack Black is one of the best examples of a rat catcher who turned to animal breeding to make an additional profit. He was known by the illustrious title of "rat and mole destroyer to her Majesty" or "supreme rat catcher". Black was quite proud of the honor and went to great pains to ensure everyone was aware of it. He even melted down some of his wife's pans to make little rat medals to adorn himself with.

Black was an undeniably talented rat catcher, but he also had a clear knack for animals in general. As with many of his peers, Black bred his own rat colonies to boost his numbers. But he took it a step further than most other rat catchers. Black engaged in some early animal husbandry and was able to essentially create early forms of specific breeds. His ability to create rat breeds eventually led him into a variant of the classic medicine show.

Black would take some of his rodents with him into public spaces. He'd then put on a show with his trained rodents acting as support. When he captured the audience's attention he'd extoll the virtues of his various rodent control solutions. And, of course, Black would then open up sales of those items to the enchanted audience.

Black also bred dogs for skill in rat catching. He was particularly fond of black tan terriers. One of his dogs, Billy, is thought to have acted as sire to much of the area's terrier population.

Dog breeding was and continues to be a fairly common skill. But Black's aptitude as a rat breeder was a novel phenomenon. Over time a market grew around his more exceptional results. Black nicknamed these as a "fancy rat". It's thought that no less than Queen Victoria herself purchased a fancy rat from Black.

Black created one fancy rat breed in particular which should be of interest to everyone in the modern world. At this point in history, there's no way to know for sure where any given breed of rat originated. But many people believe that the white rat specimens used in scientific experiments first originated as one of Black's fancy rat offerings. “The Rat Catchers” by Samual Raven is licensed under CC0 Public Domain.

From the Old World to the Modern Era

The rat catchers of old typically used primitive methods to catch the rodents. This often meant using rifles and hunting animals as much as traps. Thankfully the modern era has given us more humane options. Instead of relying on rat catchers, we can simply use newer generations of quick-kill rat traps. It's not just a more efficient way to catch a rat. Newer trap designs also act in a fast and cruelty-free manner.

Though we should remember one important lesson from the rat catchers. The profession came about because rat colonies were allowed to breed to excess. It's important to take immediate action with a modern trap if you see a rat or mouse in your home. The faster your response the less chance they have to breed.